At Bristol Barber, we’ve got some amazing news to share with our men’s hairdressing blog readers this week – and it coincides with our 30th year in business. We’ve moved!

Franco Lombardi, who set up the barbering salon on Overton Road in 1985 opposite the Hobgoblin pub, has delivered more than three decades of men’s hairdressing, male grooming, and barbering services with a small but creative and dedicated team of men’s barbers with him.

The decision to move to larger commercial premises on 31 Gloucester Road, just around the corner from the present men’s hairdresser’s location, comes after a highly-prized retail unit next to Paul Roberts music shop became available.

The new barbering salon at 31 Gloucester Road is four times bigger than the old men’s hairdressing salon on Overton Road, and includes extra features such as six barbering chairs instead of three, air conditioning, free WIFI and toilets, state-of-the-art coffee machine, lounge area with leather Chesterfield sofas, and a potential sports massage and male grooming treatment room – this is currently under discussion with local therapists.

There are other goodies and surprises at the improved Franco’s Barbering Lounge men’s hairdressing salon, but these are being unveiled during our opening week for clients visiting the new premises.

A group of 50 client joined Franco and the team on Tuesday 21st June at the new salon from 6pm, to experience the changes, bigger salon, as well as a huge pan of paella with guest beers to show our appreciation for the support. 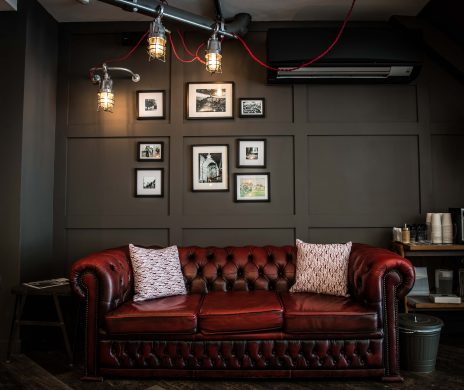 The same existing team of five barbers and male grooming experts will be working in the new men’s hairdressing salon from June onwards, and the focus remains firmly on providing excellent service, as always.

It’s going to be an awesome week at 31 Gloucester Road, so pop in and see us to experience the new Franco’s Barbering Lounge, the hottest new men’s hair and male grooming salon in central Bristol.

To find out more about our brand new Franco’s Barbering Lounge on Gloucester Road, contact us here.